‘Wexford MarineWatch’ is a voluntary organisation which provides Suicide Prevention Patrols along Wexford Quays, Estuary & Harbour, and is a Registered Charity – RCN No.20107932, CHY No.22083.

Established in December 2012, our primary objective was to try and reduce the high level of deaths by suicide in the Wexford Harbour and Bridge area – which had began spiraling out of control.  Previously, most of these people in difficulty were not intercepted in time and those who entered the water got swept away by the very strong tidal flows in the Harbour. This often resulted in drawn out lengthy searches by voluntary agencies, sometimes for weeks or even months – resulting in distress & heartbreak for the families, the relatives, the search teams and the wider community, as everyone sought closure to each tragic incident.

In an unprecedented move never seen in any town in Ireland before, all local Statutory & Voluntary Emergency Services joined forces to put this scheme in place – including An Garda Siochana, the National Ambulance Service, Wexford Fire Service, – all still playing an active role in its operation and success to this day.  This ‘inter-agency’ co-operation ensures a swift, co-ordinated response to someone in difficulty, ensuring deaths are kept to a minimum and these people get the help they need quickly.

Some volunteers on a winter Foot Patrol along Wexford Quays; 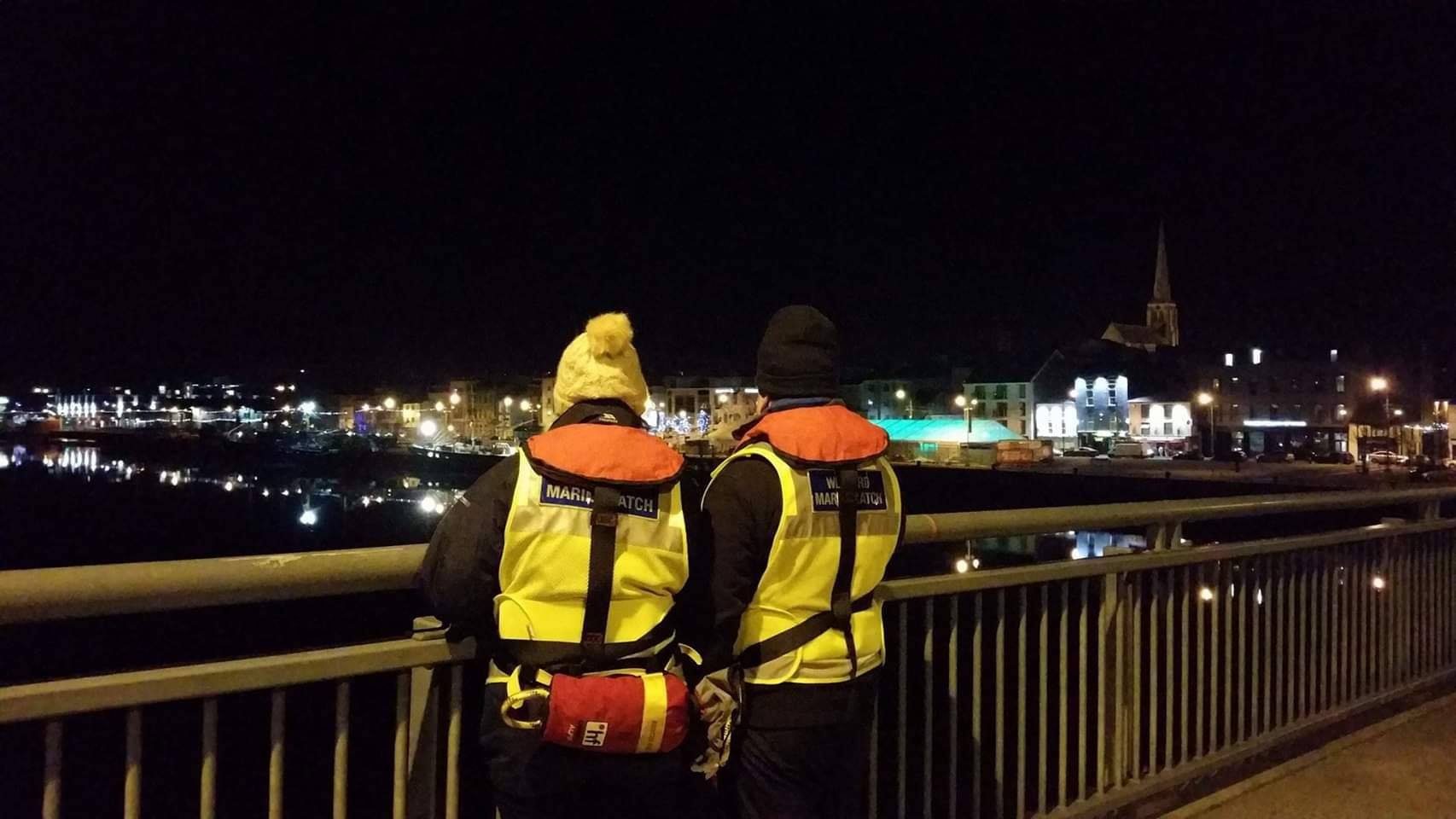 Wexford MarineWatch now have 140 trained volunteers who give up just one night their time on a rota-basis each month to assist anyone in difficulty and provide intervention to anyone considering self-harm. They also monitor life-saving equipment in the area ensuring all are intact and functioning correctly, whilst replacing any damaged or vandalised items such as stolen Ringbuoys or tangled ropes.
Each team of volunteers is headed up by a Supervisor, who is responsible for liaising with the Emergency Services including the Irish Coast Guard, and the Gardai at regular intervals. All Volunteers are trained to a high standard, and regularly carry out exercises with the other Emergency Services.

The primary purpose of this scheme is “Suicide Prevention” – to identify and intercept people who may be in difficulty before they harm themselves – give them immediate support and get them to safety as soon as possible.  The secondary remit is general ‘Water Safety’ and as a result, our teams regularly prevent drunk revelers from uncertain death by entering the water accidentally in the early hours – those who may have staggered too close to the edge of the open Quays or put themselves in danger.  Not every past death in the Harbour has been suicide – a high percentage have been accidental. Our Volunteers are there to prevent BOTH.

Whilst our volunteers interact with persons in distress, we DO NOT ENTER the water. We are there to provide a distraction & offer support (while the appropriate emergency services such as the Gardai, Ambulance or a Family member are summoned by colleagues), along with lending a listening ear & providing the person with information on local 24hr professional assistance that is available, which they may not be aware of.
“Suicide does not end the chances of life getting worse… it eliminates the possibility of it ever getting better”.

3 times more people die by Suicide in Ireland than die in road traffic accidents.
Deaths by Suicide are devastating for those left behind, for families and loved ones and entire communities –  yet Suicide is preventable.  Every life is priceless and every cent earned for suicide prevention is invaluable”. 3T’s Charity